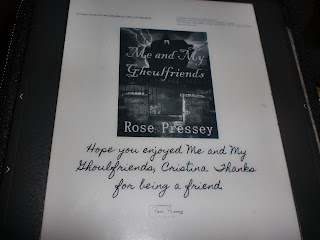 The Stoning of Soraya M.  A True Story
Freidoune Sahebjam Translated by Richard Seaver
Arcade Publishing, Inc.
From the Back Cover:
When he couldn't afford to marry another woman, Soraya M.'s husband plotted with four friends and a counterfeit mullah to dispose of her. Together, they accused Soraya of adultery. Her only crime was cooking for a friend's widowed husband. Exhausted by a lifetime of abuse and hardship, Soraya said nothing,and the makeshift tribunal took her silence as a confession of guilt. They sentenced her to death by stoning; a punishment prohibited by Islam but widely practiced.
Day by day - sometimes minute by minute - Sahebjam deftly recounts these horrendous events, tracing Soraya's life with searing immediacy, from her arranged marriage and the births of her children to her husband's increasing cruelty and the difficult details of her horrifying execution, where, by tradition, her father, husband and sons hurled the first stones.  A stark look at the intersection between culture and justice, this is one woman's story, but it stands for the stories of thousands of women who suffered - and continue to suffer - the same fate. It is a story that must be told.
Freidoune Sahebjam, the son of a former Iranian ambassador, is a journalist who was sentenced to death in absentia for his undercover reporting criticizing the Iranian government.
Richard Seaver was an editor and publisher. He passed away in 2009.
This is the most heartbreaking book I can recall reading. To say it is difficult to read is an understatement as is saying it is a compelling read. It is a book once you begin to read you will be unable to put down and unable to forget. That it is a true story is horrifying. That there are at least 15 prisoners at risk of stoning today, (Amnesty International), is incomprehensible. Those 15 are in Iran. Iran is not the only country to have stoning happen.
In reading this story and imagining how Soraya must have felt it is not difficult to see why she was silent. She must have felt trapped because she had no way to defend herself. Whether or not the charges were justified  or false the cards were stacked against her. I cannot imagine how she came to terms with her sentence. I cannot fathom what must have gone through her mind when she watched her father, her sons, pick up stones to throw at her.
The person I think I am most amazed at is Soraya's aunt. The only person to try to come to her aid. In thinking about that country and its treatment of women, Soraya's aunt stands out as a hero. She spoke out in Soraya's defense. She failed to stay quiet after the execution and it is from her that we hear Soraya's story. What an amazing amount of courage, love and strength that took. I would like to think I could be so strong. But in all honesty I am not certain. I do not think any of us who lived our entire lives free could say with absolute certainty that they could do what Soraya's aunt did.
The back cover of the book states, " It is a story that must be told." To that I add, it is a story that must be read. You cannot change anything in ignorance. Knowledge is power. Is it to say that by reading the book Iran will suddenly change its sentencing? No. We all know that is not realistic. But perhaps by becoming knowledgeable and passing that knowledge on we can eventually change things for the better. According to the author between 1979 to 1983 the Iranian government acknowledged that between 500 to 600 women were put to death by stoning. Today there are 15 at risk of stoning. That is a huge difference. Knowledge is power. I cannot imagine the strength of the Iranian people who have fought to change things for the better in their country. I am in awe of them as I am of those in countries around the world who fight against injustice; those who refuse to be silent in the face of death.
The Stoning of Soraya M. is a story that must be read. It is a story you will not forget.
By Frances - August 12, 2011 29 comments: