A Visit With Author Mila A. Ballentine, Excerpt & Giveaway

Feel free to have a cup of coffee while you indulge in one of my guilty pleasures, paranormal mysteries. There are a lot of paranormal books to choose, and I have read many, but there is one in particular that has left a lasting impression on me, Thin Skin Soul Pinned by Mila A. Ballentine. Without further ado, please join me in welcoming author Mila A. Ballentine to the cafe.
About the Author

Mila A. Ballentine is a mystery writer who doesn't shy away from writing about things that grasp the core of her imagination. She studied Creative Writing and Communication Arts at a City University of New York. Her writing is an extension of her mind’s eye and there is always an element of truth in each of her books. When she's not writing, she enjoys traveling or doing anything that allows her to put her creative energy to use.

What is the driving force behind your stories?

I have been fascinated with all aspects of unexplained phenomenon for some time now. My fascination with such things helped to foster an imagination fueled by the stories my mother told throughout my childhood. Her tales weren’t rhyme ridden like Jack and Jill. The stories were scarier than Hansel and Gretel, and the most unsettling part was that they were true stories.  Writing became an outlet where I could unleash my take on mysterious occurrences, giving life to ideas that made it difficult to differentiate fact from fiction.


Thin Skin Soul Pinned falls into that category. It was the first paranormal mystery I have written. It’s a story that familiarizes readers with a fictional town in a state that most associate with dark magic, Louisiana. As the story progresses, the reader is whisked away to an exotic isle, the Bahamas and immersed in the culture. It’s difficult not to get drawn into the characters reality. They have joys, pain, triumphs and failures like we all do, but it’s how they deal with those situations is what makes this story a gripping fiction.  I could go on and on about this book, but I won’t. The work should speak for itself, but that would entail you reading Thin Skin Soul Pinned. 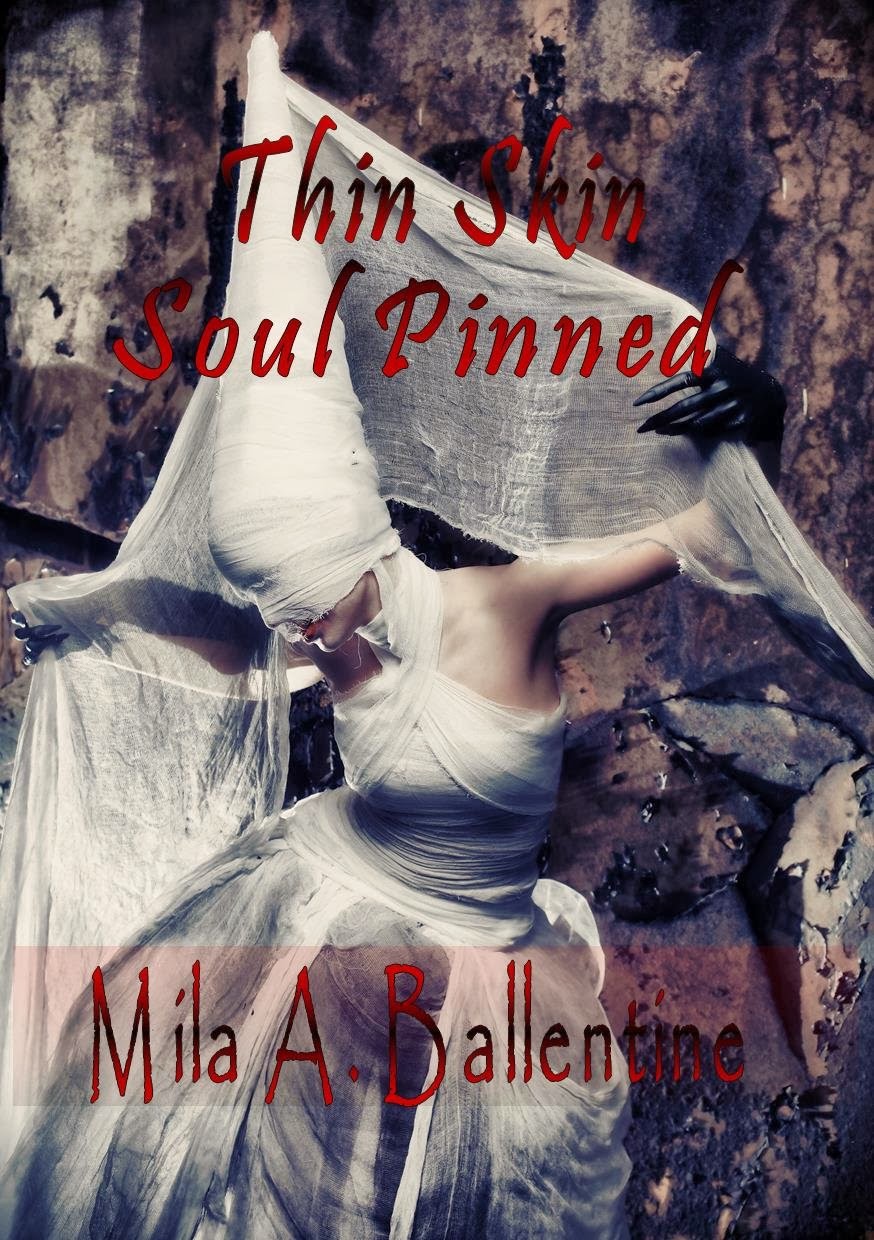 Exotic items are invaluable and some only come around once in a lifetime. Marie Tousant, a native of the Bayou, finds herself in a dilemma when practitioners of the dark arts embark on an eternal hunt.


An opposing force materializes and shares secrets that may save her from the grasp of evil. Fortunately, her allies are willing to protect her, even if it cost them their lives.

“If nothing ever changed, there would be no butterflies.” - Author Unknown

Marie Tousant sat at the edge of the bayou and looked out over the water. Her red hair flowed just above the water and her reflection blended with tall weeping willows; their branches drooped near Cypress trees that displayed their dark leaves with trunks that resembled elephant feet. Nearby, Swamp Oak stood tall draped in a coat of moss. The trees cast an eerie shadow of everything that stood around the water’s edge. It was as if there was another world beneath her reflection. Marie picked up a pebble and tossed it into the water. It made a circle where it landed and sent ripples that cascaded out along the surface of the water. Her mother once said that if she listened hard enough, she would hear the bayou call her name.
Marie hoped to sail the bayou when most people dreamt of sailing the ocean. There were many unknowns out there that she couldn’t wait to explore. The only people who shared her enthusiasm were the folks who lived in stilt houses in the marshlands. The river was a source of food for her family and others, and they tapped into the resource often.
Her father, Dan, liked to fish on his days off and Marie enjoyed watching him in action. He’d ramble on about anything that came to his mind and she’d listen to the sound of his voice even when she didn’t understand what he was saying. Every time he caught a fish, Marie clapped as she watched the fish flip and twist its body as it danced on the hook. He lost a few, but Dan reeled in many fish that were bigger than the one’s he’d lost.
Afterwards, her mother, Angelique, sat on a plastic chair in the backyard and vigorously scaled and gutted the fish in a large aluminum basin. Later on, she seasoned them and put them in the frying pan on the stove. As far as Marie was concerned, nothing exciting happened in Hapville, Louisiana except for her mother’s cooking. The smell of catfish frying filled the house and wafted out to the porch where Dan sat on a wicker chair waiting for his share of the spoils. The sun shone on his short tapered black hair.
The sun cast a light shadow on Angelique’s round face and her long wavy brown hair glistened in the sunlight as she rested on a reclined patio chair. Her full hazel eyes hid behind strips of long lashes. She watched the clouds as they moved across the sky. Soon her eyelids began to flutter and fall, and before long she fell asleep.
Marie looked over the railing. The elongated neck of Louisiana Iris’s displayed red petals that drooped and crinkled at the edges near vascular ferns that spread their arms everywhere. The coy beauty of white gardenia’s lined the edge below the raised patio, followed by a stretch of manicured lawn that flowed down close to the bayou’s edge. From there, wild shrubs took over and large trees plumed out of the river.
Marie looked over her shoulder and she saw that her mother was fast asleep. She tiptoed off the porch and walked down to the edge of the banks. Marie unlatched the rope that tied her father’s rowboat to a wooden post, climbed in, and pushed the boat away from the shore with an oar. She was finally embarking on the journey that she had envisioned for so long. Marie’s bluish-green eyes took in the scenery until one of the oars slipped from her hand. She reached for it, but it drifted away. Her thirst for adventure faded and was quickly replaced by fear.
Her shouts, followed by cries echoed throughout the backyard. Angelique awoke and looked around to see where the noise was coming from.
“Marie?” Angelique stood up and walked down to the bayou where she saw their boat drifting to the other side. “Marie!” She clenched her hands rubbing them aggressively against the flesh of her palms.
“Mommy, help!”
The longer she was out there, the more Marie thought she would be stuck there forever. Angelique’s heart raced as she saw Marie drifting further away. She took off her shoes and jumped in the murky water. Nothing mattered except helping her daughter. Marie’s eyes were fixated on her the entire time. Angelique reached the edge of the boat and pulled it to the shore.
“Give me the rope, Marie.” Angelique put the rope around her body, and crawled out of the water. She tied it around the trunk of a tree. Angelique wrung her hair and water poured out.
“Dad can get the boat later,” Angelique told her daughter softly. Marie crawled out of the boat and hugged her mother. Angelique was wet, but Marie was the one trembling uncontrollably.
“I’m sorry, Mom.”
“It’s okay, but don’t ever do that again.” She held Marie’s chin and lifted it up. “Do you hear me?”
“Yes, I promise.”
Angelique broke down and sobbed as she held her daughter. It was a traumatic experience for a four year old, but it would prime her for the things to come. Angelique walked through a gathering of closely knit bushes and trees that snagged at their clothing and itched when it touched their skin. She put Marie down when they got to their back yard.


Marie spotted a dragon fly and she took off running behind it as if nothing ever happened. Angelique shook her head. She let Marie play for a while before they went indoors.

Angelique stood in the kitchen surround by tall white cabinets with ornate handles that hung over the maple counter tops. On one side, matching glass cabinets displayed China dishes that were handed down through the family over the generations. A small desk stood in a corner near the walk-in pantry where she often sat and looked through the bills. Dan entered the kitchen and kissed her on the cheek as he always did when he came home from work. He sat on a chair beside the refrigerator, loosened the laces on his steel-toed boots, and took them off.
“Please put those outside before they light up the house with your ‘toeforreal scent.’”
Dan laughed. “That’s not even a word.” He put his shoes in the washroom down the hall, and closed the door. His finger trailed along the edge of the family photos as he walked through the hallway to the kitchen.
“How was your day?”
“Your daughter decided to tap into her inner Christopher Columbus. She sailed off in search of the New World, and instead, found herself stuck in the middle of the bayou with one oar.”
The expression on his face changed from relaxed to tense. He looked at Marie who sat across the hall from him in the living room. She lowered her head.
“Come here.” Marie walked to her father, Dan picked her up and she wrapped her legs around his waist. He kissed her on the cheek and she rubbed his kiss away.
“I thought we talked about this before Poppy. I told you, ‘I’d take you out in the boat when I’m not busy.”
Marie bobbed her head.
“That’s not even the worst of it.”
Dan looked at his wife.
“I had to swim out to get her.” His attention quickly returned to Marie.
“I don’t want you meddling with that boat.” The sugar in his voice that was normally reserved for Marie was absent. “Do you hear me?”
“Yes daddy.” Her full lips drooped as she pouted.
“I tied the boat to a tree on the other side,” Angelique told him.
“I’ll go get it.”
His squared jawline hardened. He never got the glamorous tasks, if there was such a thing when it came to parenting. He got his boots from the washroom, opened the glass door, and stepped outside on the patio. Dan put on his steel-toed boots and walked down the steps. He parted his way through itchy bushes on the outskirts of their property to get to the other side of the bayou.
Once he got there, he found the lost oar along the edge near the boat and got in. He rowed the boat to their yard. He understood Marie’s fascination with the bayou, but it wasn’t safe for younglings to go exploring on their own. The boat cut through the reflection of the trees disrupting the picturesque view of two worlds that looked identical but were complexly unique.

Do you have any new releases you’d like to tell us about?

I’ve been working on the sequel to Thin Skin Soul Pinned for quite some time now. I’m happy to announce…
News Flash: The sequel will be available in February!
Title: Unpinned by Mila A. Ballentine
Genre: Paranormal Mystery
Release date: February 11, 2014.
Lastly, I’d like to gift an eBook copy of Thin Skin Soul Pinned. Leave a comment to enter the drawing. Good Luck and thank you for spending time with us at Alaskan Book Cafe.