Screaming Jenny by Becky Muth
My rating: 4 of 5 stars

Creepy, sad tale of a haunt. It is a short, fast read. It is not for someone who is looking for gory, graphic violence, sex and language. This is the kind of tale you can read out loud before the fire on a chilly, gray day.

Mistletoe at Moonglow by Deborah Garner
My rating: 5 of 5 stars

I read this book during the Christmas in July Readathon. I love it! It is contemporary but has the feel of the classics I adore. Reading it feels like you are there, a part of the hotel. It restores your faith in people and refreshes your soul. I will read this again during the Christmas rush. It will keep me sane and remind me of the true spirit of Christmas.

The Carolina Table: North Carolina Writers on Food by Randall Kenan
My rating: 4 of 5 stars

I won a copy of The Carolina Table: North Carolina Writers on Food in a Goodreads Giveaway. (People really do win!)

I love cooking and have been collecting cookbooks for a number of years. This is not what I call a cookbook though it does have a number recipes in it. What I adore about this book were the stories of North Carolina kitchen tables. Some of them reminded me of my Mamaw's table in Southeast Kentucky. It was the various authors bringing the different flavors that make up North Carolina cuisine and serving them at homes where love ruled the table. Some of the stories will educate you. Some will have you howling with laughter. All will inspire you. These are stories that nourish the soul as well as the stomach.

Your stomach will be nourished, too. Though not a cookbook in the traditional style, there are recipes included. The Annie Collins Pound Cake will delight your taste buds as no box mix for pound cake can. It is divine and not complicated at all to make. I was never one for Butter Beans. I ate my Mamaw's and they were good. My favorites though were Leather Britches. I made the recipe for Better Butter Beans that is in the book and fell in love with Butter Beans. Who knew they could taste so good? If you have never tried cheese grits, I invite you to follow the easy recipe for this southern favorite. If you eat your cornbread on a plate, try it in a cold glass of milk, (a filling supper any night of the week). Sausage biscuits do cure anything that ails you, especially covered in gravy.

I love reading about haunts. I can remember listening to the tales of haunts when I was a child. Southeast Kentucky must be full of ghosts because I heard and still hear tales of haunts that are sworn to be true. I can remember riding in my aunts car with my cousins and going to see the haunted barn and the old haunted schoolhouse in the holler. They are among my most treasured memories. Road Trip takes me back to my roots. I enjoyed this book so much I was sad that it ended. I must have more. If you like stories of haunts that don't need blood and guts or "adult" language this is your book. The author does not rely on graphic violence, sex or shock language. She just tells the tales and lets the ghosts be the stars. My favorite story was Kentucky, of course. It is set in Pikeville, a town I use to visit as a child. When I go back now, I always go to Pikeville. I love how the author takes the haunt and gives us the old tale but adds in present day ties. Going back and forth between the two and watching them unfold together was so interesting. The ghosts of my youth and beyond still live today!

Review: James And The Amazing Gift 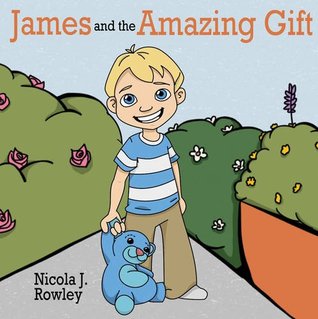 I came across James and the Amazing Gift by Nicola J. Rowley  through BookTasters. I am reviewing an ecopy version provided by the author.

I read children's books, particularly younger children's books, with children of different sexes and ages, often with one or more on the autism spectrum. I also prefer to hold off reviewing for a length of time. I know this may seem unfair to the author but I believe it gives a clearer picture of the book. As parents,grandparents,caregivers and teachers we know how often we will read the same book to our children. What I look for to review them are:

1. Are the children interested? Has something about the story caught them?  Do they care about the ending?
2. Do they like the characters? Can they relate to any of them?
3. After hearing/reading it several times, are they still enjoying it? Do they still laugh? Do they find new things in it? Do they stop paying attention half way through?
4. Do they enjoy the illustrations? Do they make the connection between the words and the picture? Do the illustrations ignite their imaginations?
5. (maybe it should have been higher up) Was I able to enjoy the book the first time? The fifth time? The twentieth time? Did I find it a chore to read it? Was I able to find anything new to comment on with multiple reading?
6. Did age/sex/ability affect the child's view of the story?

I enjoyed James and the Amazing Gift. I found value in the story. The message is an empowering one. I had a couple of audiences. The one most often was made up of two boys and a girl, the youngest 3 and oldest 10 and on the spectrum. The second group was similar in ages and sexes. They had been victims of abuse. I was hoping the story had value for them. I hope the message stays with them. I wish I had been given a book copy so I could have gifted it to them.

Both groups of children liked the pictures though they wanted them bigger. In a print version they may be bigger. They all liked James. I could tell they were relating to the story by the reactions to the lady. The children who deal with autism, thought the lady was on the spectrum. They thought this was why she did not make eye contact or talk to anyone. The children who had been abused thought she was being hurt at home.  I found it interesting and a way to open the door of communication with the first group. After hearing the other children's observations, I was able to introduce different reasons for the lady to be sad, (something important for the one on the spectrum, who was the oldest).  The first group of children are not tired of the story. We have had the book for a month now. We read it often with conversations about feelings and the importance of caring for others.  The second group read the story three times before they moved on. They were still enjoying it at that time. I hope James becomes a part of them.

Sexes of the children did not matter, with both equally enjoying it. Age played a little into it with the three year old not getting the bigger message but still listening and enjoying it. I thought the 10 year old would get bored but he hasn't. This could be due to us working on emotions with him so much. I think it is a lovely story with a much needed message.

For more about the author: