Can You Keep A Secret?

Can You Keep a Secret? by Sophie Kinsella


I enjoyed Can You Keep A Secret?. I loved Emma. You read this book and laugh at loud. You think things that happen to Emma never happen but in your mind you are going, "please at least not to me"! We all know Emma, her flatmates, her boyfriend, her co-workers. We have all had moments when we cringe at something we did or said. we hope some of those times remain secret. We know others want them known so they can laugh even though they also have those moments. Emma doesn't have earth shattering secrets. They are relatively harmless but embarrassing. The kind you and I most likely have. I think that is the charm of Emma. There were places in this book where I laughed out loud and places where I was held in suspense. It is a book about life, friendship, boyfriends and, of course, secrets.

Follow My Book Blog Friday is a weekly meme hosted by Parajunkee's View andAlison Can Read where we all get together and say HI! @ lucky blogs will be selected to be a feature, one for each site. This weeks lucky blogs are...The Little Book Blog and The Book Addicted Girl. If you would like to play along be certain to visit Parajunkee' View or Alison Can Read for all the details.

Q. Let's step away from books for a second and get personal. What T-Shirt slogan best describes you?

It says Goddess in Training

Theme Thursdays is a fun weekly event hosted by Reading Between Pages that will be open from one Thursday to the next. Anyone can participate in it. The rules are simple:
A theme will be posted each week (on Thursday’s)
Select a conversation/snippet/sentence from the current book you are reading
Mention the author and the title of the book along with your post
It is important that the theme is conveyed in the sentence (you don’t necessarily need to have the word)
Ex: If the theme is KISS; your sentence can have “They kissed so gently” or “Their lips touched each other” or “The smooch was so passionate”
This will give us a wonderful opportunity to explore and understand different writing styles and descriptive approaches adopted by authors.
This week’s theme is
ANY ACTION (go, walk, close, clap etc)
Both vampires moved off the bed  and stared at each other silently with wide-eyed expressions. Pg 138
Caleb spun around to see who was addressing him and noted two tall men in dark suits standing at the end of the hallway from where he had wandered. Pg 275 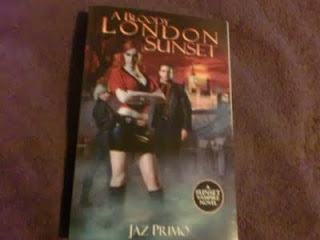 Bloody London Sunset Book Two of the Sunset Vampire Series by Jaz Primo.
What action did you choose? Leave a comment please letting me know where to find it. Thanks for stopping by. If you choose to follow thank you.
By Frances - July 28, 2011 14 comments:

* WARNING* This post is about Vets and is brutal

I originally wrote this post as part of a meme. For some reason when I went to the Host page a prior meme went up instead of the home page. So I wrote the wrong meme. The meme this was written about was for July 4th and we were to connect our  post to that theme. Sorry about the confusion with this one. I have no idea why the home page did not come up first. I am leaving the post up as I  think it is important. The author of the book I took the snippet from is trying to give a voice to Veterans. His information is at the bottom.

* WARNING* The snippet I chose is intense, brutal, contains foul language and for me is important.  I realize it is long. I chose it because I know that everyday somewhere in the world a soldier is going through this - whether it is a flashback or it is happening in real time. And they did it  or are doing it for us. The people back home. I am not in support  of war. I am in support of our soldiers who have kept us and who continue to keep us free. My son fought in Iraq. He came home with memories like this one and unable to walk on his own anymore. While I do not believe we truly had a reason to be in Iraq, he went and did his job. I am proud of him. Regardless of the reason we are over there my son went believing he was helping someone. He talks of the good people he met over there. Not soldiers he met there but Iraqi citizens. The ones who wanted to be free. The ones who thanked him. The ones he wanted more than anything to help. So now he lives with PTSD and walking with assistance while he waits for new legs. And when asked, he says he would go back and do it again for those people and to keep us free. I hope you read it. I hope you understand why I think it fits the theme.

Ted Krever. Mindbenders (Kindle Locations 805-846).
Ted is trying to do something to help Vets by offering them a place to tell their stories. If you are a Vet, or know a Vet who may be interested, please direct them to his website. He is  an honest man with a lot of integrity and respect for our Vets. Please go to his blog, scroll down and read Vets- Better Off Dead?- July 26, 2011,
My Vet Story from ‘Mindbenders’ (Part One) - http://wp.me/p1twy1-c3
‘Mindbenders’ excerpt 2 – Greg in Iraq - http://wp.me/p1twy1-cg
http://tedkrever.com/blog/my-books/mindbenders/
Please leave a comment.
By Frances - July 28, 2011 No comments: