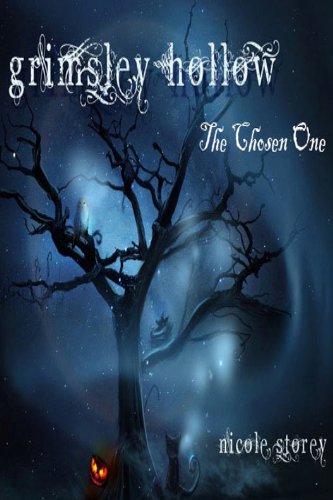 Grimsley Hollow: The Chosen One By Nicole Storey
* I was provided with a copy of this book for review purposes by the author. No promise of a good review was given. The opinions expressed are my honest feelings. I received no compensation for this review.*
In the world of Grimsley Hollow all the magical beings are in trouble. Living in safety and peace, their world has been threatened by a powerful evil witch.Now leaders of Grimsley Hollow have been captured and it is up to a small band of young magical beings to save them. For the rescue to be successful, they will need the help of one very special human child.
Gage is 11, living with his parents and sister, and looking forward to Halloween on his farm. Gage has no real friends as he has problems with social skills. Making and keeping friends is one of the difficulties when you are autistic. Another part is understanding things in a literal way. Most people with autism have a difficult time when you speak of things in a fantastical way. You can imagine his surprise when he meets Eve, a witch girl from Grimsley Hollow others cannot see. It is difficult for Gage to grasp that there is a magical world but once convinced, Gage is off on an adventure to help save his new friend and the magical people from the evil that has threatened to destroy their world.
I have a problem with Hollywood and the way it takes a book and completely changes it when it puts the book on film. Yet, this is a book that I yearn to see on the movie screen.  Nicole Storey does a phenomenal job of bringing the world of Grimsley Hollow to life. You easily picture it in your mind and get lost completely in the fantasy. The captivating story line, combined with characters you can care about and the vividness of a magical world where you are held captive make this one of the rare books you really wish were a movie.
I am raising a child with autism. One of the things you learn early on is that every child on the spectrum is unique yet many have similar challenges. Nicole did an exceptional job bringing the challenges of autism into the story. Seeing Gage overcome some of his challenges was perhaps one of the most endearing qualities of this book for me. Overcoming a challenge, any challenge, are the goals of people with autism and those who love them. No one understands exactly how much goes into daily living as the parents, or in my case- grandparent, of an autistic child. This book had me cheering for Gage so many times. I really liked how Nicole showed the process Gage went through trying to overcome his challenges. Had she just had Gage accepting everything it would never have passed for me. I would have been thinking no way can he do that. Instead I was able to think, "c'mon Gage you can do this.", and then let my breathe out when he did.
This is also a book I would love to see used as part of the curriculum in middle school. It introduces children to autism in a palatable way. It helps them to see a child with autism is really just a child who thinks differently but is still likable. Grimsley Hollow not only brings forth the challenges for them in a way they understand, but also the brings out the strengths  the child has. Children learn, without realizing it, that someone who has autism is unique but also average. In other words, another kid just like them. This book can go a long way in helping bridge the, "he/she is so different" gap that exists between children on the spectrum and those who are not.
If you are looking for a delightful fantasy that will engage and educate your child this book is the one you should choose. The children I read this with were enchanted with the story. It was difficult for them to wait for the next part. I could imagine them under the covers with a flashlight. I was. You will be too. It is reminiscent of Harry Potter.
Please leave a comment. Your thoughts make my day!
By Frances - October 13, 2011 2 comments:

This is the first part of a Halloween story from Stephany Simmons.

Stephany is hard at work getting her follow up, Vampire Blues out to us. I cannot wait!
Stephany's blog is at http://stephanysimmons.com/blog/
She is on Good reads http://www.goodreads.com/author/show/5028646.Stephany_Simmons?origin=
Facebook: http://www.facebook.com/pages/Stephany-Simmons/204354502914535
Twitter: http://twitter.com/#!/stephanysimmons
Please leave a comment. Both Stephany and I are interested!
By Frances - October 13, 2011 2 comments: