12 Days of Christmas Extravaganza is being brought to you by Peggy at Pawing Through Books, Jennifer at Books and Barks, and myself. Each day for the next 12 days each of our blogs will feature a different author. There will be guest posts, interviews and giveaways! So be sure to stop at each blog to join in the fun!
A special thank you to all the authors who are participating and those who have donated prizes!Merry Christmas!
Today's guest is:
Carolyn Chambers Clark
Author of the delicious mystery, Candy, Murder and Me!
Cookie Berelli, candy addict and dress designer co-stars with Sigmund
Freud, a psychoanalyst dachshund, in her first mystery, CANDY, MURDER
& ME..
When full-figure dress designer and candy addict Cookie Berelli
discovers the PI she hired to clear her of embezzlement charges dead
in her design studio, she investigates, to wacky results. For example,
is Eugene Gemstone involved? After all, he is her number one fabric
cutter at Florida Fashions, and he did start acting overemotional
after he wore one of the dresses she designed into the ladies’ room at
Chez Riso and got arrested. He's especially suspect now that he's
disappeared with all of Cookie's candy stash. Then again, it could be
that cute PI, Andy Shea, who shows up at the funeral of her dead PI,
and makes her hear the love song from GONE WITH THE WIND in her head,
or it could be just about anyone else on the planet.
Everyone's starting to look suspicious now, especially Yuri Yarutski,
who owns a sports bar in the bad part of town and wants to go a few
rounds with Cookie, the woman who lives in a tree (who in Florida can
live without air conditioning?), and even Bernadette Humphreys of
Bernie's Tattoos who comes up with the weirdest body art. Okay, yes,
Cookie did find the body, in fact two of them,and so she has to clear
herself, but does that mean the murderer has to go after her?
Recipes from her Norwegian and Italian heritage including Grandma
Berelli’s Pralines (“Worth going to jail for”), Cookie’s Maple Candies
(“So good they’re criminal”), and Nana’s Kringlas (“To kill for” - ),
among others, are available throughout the story to break up the
mayhem and available at the end, indexed by chapter.
With such a great response from readers, Cookie plans to put her next
murder investigation in print. 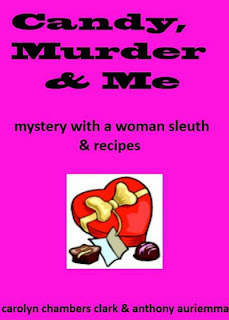 My review of this delectable mystery is here.
COOKIE'S CHRISTMAS
Cookie Berelli's chewing on a stick of strawberry licorice and
wondering what Christmas will be like with her parents and the rest of
her cuckoo family. Sure, they're okay people, but why does her mother
always pick on her clothes, her weight, and just about every else she
does?
She starts to picture what's going to happen at Christmas.
For starters, she's going to knit a red sweater and beret for Sigmund.
Dogs always look so cute in clothes, don't they? Of course, with his
short, dachshund legs, he'll be tripping all over and getting caught
on the tree and probably knocking it down a couple of times. That's
the breaks when you're a top fashion designer.
"Hmmm..." she says after she finishes the ensemble for Sigmund. What
else does she need to do? Cookie prances into the kitchen and takes
out the fixings for edible Christmas tree ornaments. She takes out the
angel and Santa cookie cutters. This is going to be way fun!
Especially when Uncle Anthony rolls in, the smell of garbage truck
around him like a halo after he'd finished off the route for one of
his pick-up guys. Of course, he'll eat all the stuffing and none of
anything else. That was just what he did. Good thing Cookie made her
own dressing, which she'll hide so at least a few people can grab a
bite or two before Uncle Anthony pounces on it.
Cookie's gotta hurry and get dressed. After Sigmund okays her wearing
a pumpkin-colored sheath she designed, she toddles out with ornaments
in hand and the dog trailing behind. When she gets there, all the
nieces and nephews help her put the ornaments on the tree. At least
that keeps her out of the kitchen and away from the steam Mom's making
in there. Pasta on Christmas? You bet. Everyday is pasta day at the
Berelli's.
When Mom calls out, "Dinner's ready!" everybody makes a mad dash for
the table where they chow down way too much pasta, turkey, ham, mashed
potatoes and gravy and her brother, Joey's, broccoli supreme, which
isn't too supreme. When everybody's too stuffed to get up, Cookie
hears a bang and drags herself up to see what's the clatter all about.
In the living room, the tree's on the floor and half the edible
ornaments have big holes in them and teeth marks, too. Who in the
world would eat the ornaments. "Sigmund!"
The dog's no where to be found and neither is Esther, Uncle Anthony's cat.
Using her advanced investigative skills, she tracks them down by
following the trail of of cookie crumbs. Under the sink in the laundry
room are the two criminals, Sigmund and Esther, crumbs all over their
faces and paws.
Cookie shakes a finger at them. "Okay, which one of you knocked over the tree?"
Sigmund points at Esther and she points at Sigmund.
Cookie shakes her head, goes into the living room and rights the tree.
"Good thing, I'm around here to fix these things," she mumbles and
goes back into the kitchen for a slice of pumpkin pie.

Find sample chapters of COOKIE, MURDER & ME at
http://freeandbargainebooks.blogspot.com by clicking on the book cover
in the right hand column.

GIVEAWAY
To be entered for a chance to win a Kindle version of Candy, Murder & Me... please leave a comment with your favorite holiday treat you always looked for in your stocking. Please be sure to include your email so I can contact you if you win!

When you finished here please stop by and see Jenn at http://www.booksandbarks.com/and Peggy at http://www.pawingthroughbooks.com
And be sure to enter the Rafflecopter Form to be in the big Giveaway!  ENTER HERE