Catch That Collie review by Junior.

On July 27th, I introduced you to my friend, author Tarrin P Lupo,(click the link above to read that post). Tarrin had written a book to help children learn how to take responsibility for a dog. He has been trying to raise the money to get the book to shelters across the country. He has 10 days left to make his goal and is short $100. I am trying to help him. I think the book is awesome. Here is what Junior said about the book: 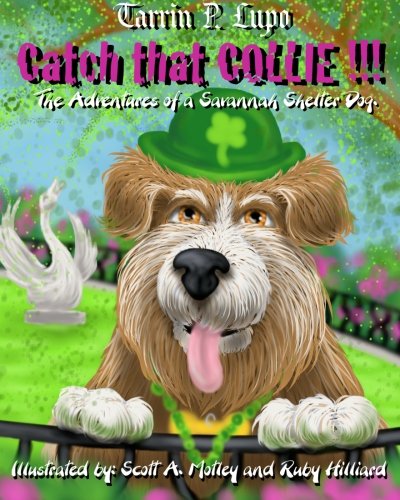 "I really like the dog book. I really like the picture when the collie was excited to get a forever home. I learned a lot about dogs. I have a black dog we adopted. Her name is KC. I learned black dogs are least likely to find a home. That makes me sad. I love KC. She is the best black dog ever. I don't know why people don't like black dogs. I know dogs need food and water like I do. I know they like to play, (me too). I learned how important it is for them to have exercise. I also learned they are sad if they are alone.  I was sad for Raja when he ran away to find Marcie. I was worried he wouldn't find his way home. It was good he had his tag with his address. Adopting a dog is a big deal but this book helps you know everything to do. You should buy this book if you are going to adopt a dog. And if you can pick a black dog. They are really fun! They will lick you a lot because they are happy dogs."


So please think about it. If you would like to help Tarrin or learn more please click the widget on the side. It will take you to the site and you can even hear Tarrin read the book. Thanks!


Please leave a comment. Junior and I love to hear from you.

Sorry my Tuesday Teaser is going up a bit late. We are having an autism fun day at my house. So far my 4 year old has only flashed 3 of my neighbors while screaming.


Teaser Tuesday is a weekly meme hosted by Should Be Reading Pick a page and a couple of teaser sentences from that page to share.


*  All of the books below I received from the authors with a request to review.  The promise of a good review was neither sought or promised. No compensation other than a copy of the book to be reviewed was offered or received.*


My first teaser is from The Bond Conqueror by Phillip Hall and A. C. Hall. There is a lot of action in this book. Yes I am still reading it - life is getting in my way of reading. I am getting there though and school is starting. *Huge smile*

From Good Reads:
Charles Bryant seems to have it all. A college professor on the esteemed intellectual planet Academia 7, Charles is something of a celebrity thanks to his branding as “the Bounty Hunting Professor”. But his bounty hunting missions are more than just a gimmick. Charles has spent a decade of his life consumed with trying to track down the last man alive who caused the death of his wife. And now he may’ve found him.

With a rival professor trying to take him down back home, a powerful organization doing all they can to kill him and with every tough guy in the galaxy gunning for a piece of the legendary “Bounty Hunting Professor”,
Charles Bryant and his friends may find completing their mission means more than just locating one man. It means coming face to face with the malevolent force that wants to reshape the whole of the galaxy and living to tell the tale.
The excerpt I chose is located on page 163.
Thinking deeply wasn't among Harbinger's favorite things to do and he tossed the blood soaked coat down and then stood. He walked to the edge of the building and stretched, feeling better now that Isaac was long gone from the area. Harbinger closed his eyes and took a long, deep breath.
His eyes shot open, a scent on the air putting him straight into combat mode. He scanned the dark street below and saw them. Eight well armed, coordinated men, approaching the building fast. There was a ninth man among them, scrawny and clumsy, obviously a civilian.
The harbinger was instantly back into combat mode, all other thoughts gone from his mind as he studied the men below. As they prepared to breach the building Harbinger pulled out his knife and smiled.
The second is from a book I just started, Darwin's Children by Natasha Larry.

From Good Reads:
Life can get pretty complicated for any seventeen-year-old girl, but for a home-schooled telepathic black girl trying to survive in a prestigious private school in small-town Jonesborough, Tennessee, it can be maddening – especially when her telepathic father keeps eavesdropping on her thoughts!

Jaycie Lerner’s family isn’t the usual mom-dad-kid setup. Jaycie’s mom’s MIA, but Allison, her personal live-in ‘trainer,’ is more than a mom, with her own special abilities, like being able to lift cars and run incredibly fast. And Jaycie’s godfather John is more than persuasive – he can literally convince anyone to do anything.

As far as the rest of the world’s concerned, Jaycie’s on the outside looking in. The townsfolk love Jaycie’s pediatrician father, but she doesn’t fit in with ‘normal’ kids, and she doesn’t really want to. Most of her free time is spent training to keep her telekinetic and telepathic powers under control. But there’s one thing she can’t control – and that’s her feelings, especially when her best friend Matt is nearby. If only he knew what she was truly capable of...

Everything seems to be status quo for Jaycie until she receives a cryptic message from a stranger and meets a very unusual girl new to Jonesborough. Then all hell breaks loose!
The excerpt I chose is located on pages 51-52
Jaycie blinked her eyes in surprise. "They would ask people to do something that is wrong? I thought angels were..." She stumbled, trying to think of a word to describe her preconceived notion. "Angelic," she finished lamely.
John laughed. "They have no concept of right or wrong. At least, notion the way we think of it. Like I said, they are a single-minded race. They have no qualms about asking a person to carry out any act, as long as it achieves their goal of restoring balance. And balance can be restored by any means necessary. They may want a child killed, or an elderly woman saved. To them, balance is good and imbalance is evil."
Jaycie looked at him in stunned silence and he sighed. "I wish your father weren't so hell-bent on your having a normal life. There is so much out there you have no idea about. Things you need  to know." He sighed again and looked above her head, seeming lost in thought.
"You can teach me," she reminded him as he looked back at her. She had so many questions but could only manage to ask one. "What should I do?"
John sighed for the third time. "Trust your intuition. It's one of your gifts. But most importantly, remember that they can't force anything on anyone. Angelic Guardians can never, for any reason, interfere with anything in the physical world. They can only ask people to carry out their goals for them. So, you always have a choice."
I hope you enjoy my choices. They are both good reads so far. Different from each other. I think you expect that from me by now.  Leave a comment and let me know where to find yours. If you are not part of the meme, please feel free to tell us where to find your blog. Also leave a quote from a book if you like.
Have you  entered the giveaway for the books on the zombie apocalypse? If not, please Enter Here for The Survivor Chronicles Giveaway
By Frances - August 23, 2011 12 comments: