Name 3 authors that you would love to sit down and spend an hour or a meal with just talking about either their books or get advice on writing from?

Wow! This is a tough one. There are so many amazing writers out there.
I would choose:
1. J R Rain. I like his books a lot. He has a nice variety of genres he writes in and does them all well.
2. Lara Adrian. I love her Midnight Breed Series.
3. Kat Nove and Jeni Decker. I know that is two but they wrote the book, Waiting for Karl Rove, An Utterly Improbable Road Trip Memoir, together. They are very kind and funny ladies. I know I would have a blast, (and maybe end up tasered before the evening ended).
Thanks for stopping by.
By Frances - July 22, 2011 12 comments:

First Lines Friday is a new bookish meme hosted by Literary Marie of Precision Reviews.   Here is how to play:
Grab your current read(s).
Share the first line(s).
Include the title and author so that other FLF participants can add the       book to their TBR Lists. 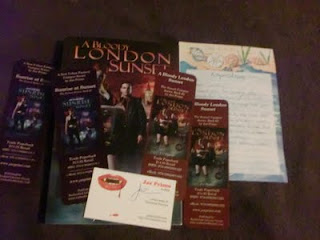 A Bloody London Sunset by Jaz Primo
Caleb Taylor's heartbeat thundered in his ears as he raced down the hallway. Have to help Katrina! Speeding through the living area into the dining room and wielding the polished sword over his head with both hands, he closed on the unprotected back of the hideous-faced vampire, Chimalma, who was battling the woman he loved. 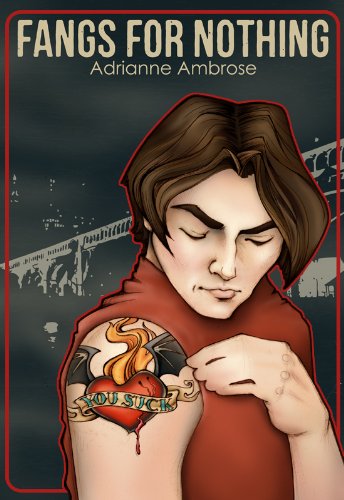 Fangs For Nothing by Adrianne Ambrose
"Do you want to see the vampire?" the old man hissed. I was wandering around Chinatown by myself because my friends were lame and wanted to go dancing instead of actually trying to see something of the city. The answer to the old guy's question was yes, damn straight I wanted to see the vampire. I mean, if there was one available for viewing.
Thanks for visiting today. Leave a comment with your first lines. I love knowing what everyone is reading! You hear of so many different and interesting books.  :D
By Frances - July 22, 2011 3 comments:

I am very pleased to announce that Weston Kincade is giving away this ultra-fabulous book. AWESOME. But you have to act fast. The coupon code is only good until the end of July 2011. All forms of digital copies are free on Smashwords. Just use coupon code NH89W.
If you grab this one why not return the favor and post a review of the book on Smashwords, B&N, Amazon, Goodreads or wherever you like. It is not required - I'm just saying an honest review posted would be nice. And no I am not related to the author nor do I personally know him.
http://www.smashwords.com/books/view/61283 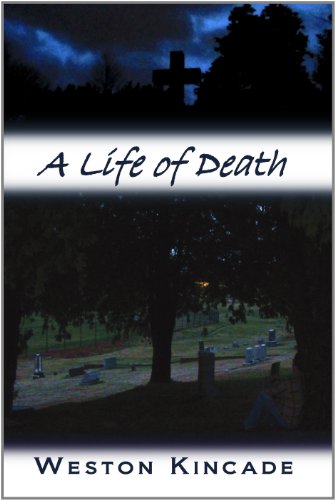 My review:
A Life of Death by Weston Kincade is a coming of age type book with a paranormal twist. This story opens with a vision Alex is having of how is father died - killed by a drunk driver. Jamie, Alex's son is doing a paper for school. He tells his father,"Dad, I need to know about the most important thing that ever happened to you. Was there ever something that changed your life that much?" What follows is a recanting of a horrifying few weeks of Alex's life. A few years after Alex's father is killed his mother remarries, ironically to a violent drunk. And so we hear a tale of horrible abuse, murder, guilt, fear, the voices of the dead, love, understanding and hope. Mr Kincade did a wonderful job telling this story. The characters are well developed and easy to relate to. They are people you know and some you hope to never know. It is intense at times, it will move you and it is realistic. Mr Kincade has written a story you will get lost in. Time will fall away while you are glued to reading it. I cannot tell you how much I enjoyed this book. I wish I could give it more than 5 stars.
By Frances - July 22, 2011 No comments:

This post is to introduce you to some books that I think look interesting. Let me know what you think.

Retribution by Alick Harris
http://www.lulu.com/product/file-download/retribution/16262443
What happens when you take everything from a man, but leave him breathing? It’s the 1800s and the Wild West is rife with gangs vying for control and power in a land growing with wealth and stature. It is only the incorruptible lawmen that stand in their way. When the Gaust Gang sets upon Marshal John Steele and slaughters everyone that makes his life worth living, the gang of ruthless outlaws unknowingly allow him to survive their brutal attack. With the help of an impoverished doctor, the Marshal heals from his injuries and vows swift vengeance that only a man with nothing to lose can deliver.
I do not usually read westerns but this one sounds very exciting.

Ollie by Stacy Bolli
http://www.lulu.com/product/paperback/ollie/16218623
Rochelle doesn’t have much: a minimum-wage job, a mobile home in the sticks, and a prescription pill addiction. But she has Ollie, her pet Oscar fish, and she loves him unconditionally. If Ollie were a dog, free to roam around outside, Rochelle might have worried when a fire breaks out at the local chem-lab, releasing noxious fumes into the air. But Ollie is a fish, safe inside his fifty-gallon universe, so there is nothing to fear…or so she thinks. But somehow, inexplicably, Ollie is growing. And he seems to gaze at Rochelle with a new sense of understanding. Is it her imagination, or is Ollie just a little more…well,human these days? For Rochelle, it makes no difference; she’ll love him and protect him despite the cost, even if it breaks her heart. For Ollie, her heart may not be enough.
Scifi and horror usually equals a good mix.  And I like the cover.

Rosebud by Patricia Clements
http://www.lulu.com/product/paperback/rosebud/16205645
McCaffrey, a police officer killed in the line of duty by an unseen assailant, is eternally bound to the road on which she was killed. She spends her time pacing the dusty ground, pitying the other victims of their shared killer, until a chance encounter with a young man named Barry allows her to hitch a ride and possibly achieve the only thing she’s desired since her death. Together, quite literally, they take on the burden of apprehending McCaffrey’s killer, in the hopes of setting free the tortured souls who walk the road.
Supernatural thriller. I hear there is a bit of paranormal romance in this too. This one is calling my name.

A Pirate's Tale by Bret Jordan
http://www.lulu.com/product/paperback/a-pirates-tale/16075238
Shipwrecked and washed ashore, the pirate Block wanders a lush, jungle island until he stumbles upon a tribe of natives. Held captive, he is forced to embark on a mission he doesn’t understand, a mission that will test all of his considerable skill. Plotting his escape, Block traverses the labyrinthine, underground caverns of the island, but the creatures he encounters there have a different plan. Now Block must summon all his strength and courage if he hopes to thwart them. But have the natives sent him here to test his mettle, or for something far more sinister?
I like Bret Jordan. Some of you may know this from my posted review of Alone in the Mist.  This is a scifi horror story by him. I noticed in the tags it had zombies. I love zombies. I love pirates. Both in the same book by an author I like just sounds like a winner to me. And isn't that cover kind of creepy awesome?


cover photos and synopsis from Dopamalovi Books http://www.dopamalovibooks.com/
By Frances - July 22, 2011 No comments: