I am so pleased to have Kat Nove and Jen Decker on my blog today. They co-authored the soon to be best seller, Waiting for Karl Rove.  It has been awesome getting to know them.

Ten for the fast round
1.      Dogs or Cats?
K Cats. I do like dogs as long as they weigh as much as my ass (we’re talking Great Dane territory here) but I prefer cats. Why? Because they do to me what I’d like to do to most of the people I come into contact with on a daily basis. (Remember I work retail.) Tell them to go f&*k themselves. I like that in a mammal.
J  Cats.  I opted for a dog after my oldest son suffered a collapsed lung due to a cat allergy. Damn kids, always squashing my joy.
2.     Beach or mountains?
K  Mountains. I love the ocean, but don’t like sand. My favorite temperature is twenty degrees and Texas beaches are hot. Of course, I’m terrified of heights, so I could be conflicted here. Let’s say I like the base of mountains better than the beach.
J  Neither because both presumably involve sweat and I don’t do sweat.  I’ll choose mountains if I can look at them from the comfort of my chateau in France while relaxing next to a toasty fire.
3.     Coffee, tea or soda?
K  Coffee with cream and sugar. Lots and lots of coffee. Lots and lots of peeing. Running to the bathroom is my exercise plan. Screw crunches.
J  Coffee!!!!
4. Cake or pie?
K Pie. I eat both Frito pie and coconut cream pie in a bowl, but not at the same time. That would taste like shit.
J Whichever I can have now.
5. Movie or book?
K Book. I love movies, but with very few exceptions (The Green Mile, Terms of Endearment, Schindler’s List) books always seem to be better than the movie. If Waiting for Karl Rove is ever made into a movie, the book would still be better.
Now let’s casturbate!
Diane Lane will play me. Kate Winslett will play Jeni. I don’t care who Johnny Depp, George Clooney and Denzel Washington play, as long as they all beg to meet the author. Did I say author? I MEANT the authors.
J Book.  No, wait. Movie… No, book.  Depends on my mood.
6. Johnny Depp or Brad Pitt?
K Johnny Depp. I consider him the greatest actor of this generation, unless you count my ability to fake liking my customers.
J  Neither. Morgan Freeman could teach them a thing or two about cool.
7. Museum or zoo?
K Museum. Zoos make me sad. I hate to see animals in cages. Funny zoo story. At the San Antonio Zoo I overheard a woman telling her daughter, “Mira at the tiger, mija.” She was looking at a snow leopard. I spent the rest of the day saying, “Look at the tiger.” Flamingo. “Look at the tiger.” Baboon. “Look at the tiger.” Hippo. I’m kind of a smartass.
J Really? Hmm, let’s see.  A nice, cool inside environment where I can leisurely peruse art… or a hotbed of stress involving the stench of animal feces and whining kids.  Let me think about it some more.
8. Phone call or text?
K  Phone call. I don’t want to talk to anyone enough to even answer the phone, which means I certainly don’t want to waste valuable writing minutes on texting. (See answer to next question.)
J  Neither. I don’t have time for that crap - unless you’re offering me money, in which case, phone, text, e-mail, homing pigeon, singing telegram…
9. Computer games or board games?
K Computer games. Hours and hours of computer games. I think up entire novels while playing them. The thinking up is the important part of being a writer, right?
J Scrabble; Best. Game. Ever. (Old-school board game, none of that fancy-schmancy computer crap. I wanna feel the tiles in my hands.)
10. E reader or real book?
K Real book. I love book covers and love even more discovering the idea behind the cover. I love to hold a book in my hands. I love to smell them and fall asleep with them on my breasts. Uhh…is this answer getting weird?
J Real book. I’ve got a Kindle but rarely use it for the same reason as I want to fondle the Scrabble tiles.  The closest I get to the big “O” these days is when I walk into a library and take in the unmistakable aroma of years of weathered pages, limitless possibility and… quiet. 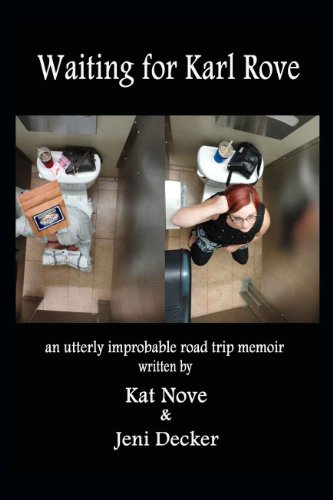 Think Thelma and Louise—only Thelma’s menopausal, Louise is an erratic big-mouth with a penchant for discussing her hemorrhoids, and they’re on a road trip to wrestle an apology from Karl Rove by any means necessary.


There is a second post with the book trailer video.  I could not get it all on the same post. Please check it out. It is awesomely funny!
I loved this book.  Whenever I am asked if I have a favorite book I say no because there are so many I love. Now I have a book I can call a favorite. Reading Waiting for Karl Rove you will feel right there with Kat and Jeni. This book will make you call up your best friend and rope her into a road trip, (even if she did set your hair on fire – she apologized).  You will laugh so hard you may tinkle, (if you are prone to this, wear Depends or put one of those puppy training mats under you).  Carve out a block of time, and order food because once you start the trip you will not want to stop. This book will be the most fun you have had on the road, (with the bonus of not getting lost, sleeping in the Bates Motel, eating bad food or  getting tasered and being hauled off to the pokey).
Look for it on Amazon:
http://www.amazon.com/Waiting-Karl-Rove-utterly-improbable/dp/1461028590/ref=sr_1_2?ie=UTF8&qid=1311213195&sr=8-2
Barnes & Noble
http://www.barnesandnoble.com/w/waiting-for-karl-rove-jeni-decker/1030537299?ean=9781461028598&itm=1&usri=waiting%2bfor%2bkarl%2brove