Hi everyone. Sorry I have not been around much. I got knocked over by a migraine that has held on for 6 days. It is finally going away. I have asked author Mark Rudolph to speak with us today about how he came to write his book, Facing the Son, A Novel of Africa. 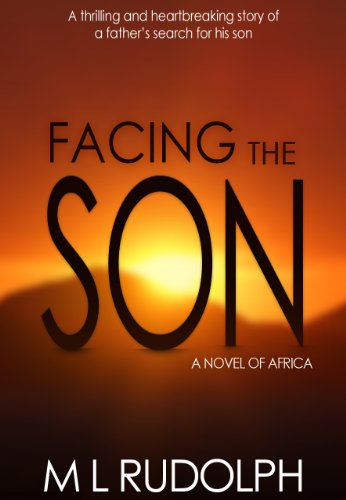 Here is the synopsis from Good Reads:
American Matt Reiser travels to The Ivory Coast on a mission to locate his estranged son. His only guide is a three-year old postal address. Fighting cultural vertigo and disorientation at his arrival at the Abidjan airport, he relies on a glib and persistent limo driver who speaks just enough English to gain Matt's trust.

The next morning, Matt wakes up drugged, robbed, and dropped into a grim city slum. Without ID, without money, and with no idea where to turn, Matt forges unlikely alliances. Caught up in a local gang battle that takes him on a perilous journey out of the city and through the backcountry, he strives to stay neutral and continue his search for his son.

Loyalties form. He makes choices. Facing his son however proves to be his toughest challenge


Thanks Cristina for asking me to contribute to your blog.
My first real job was working for a US multinational, based in Brussels, from where I was responsible for organizing the sales and delivery and maintenance of major truck fleets to West African countries.  This was in the early eighties when communication was by telex, when flights to Africa were infrequent, and when once you were there, you were largely on your own.  I would go for a month at a time to tour the West African countries where the State, AID, and United Nations organizations ran projects and kept offices.  These men, and they were all men, were my potential customers.  My competitors were the Soviets, the Chinese, the French, the British, the West Germans, and the Japanese.  All business was conducted in French, which slapped my textbook French into shape pretty fast.
Most the projects were meant to improve the lives of people living in near-Biblical conditions: improving access to water, building roads and bridges, establishing self-sustaining businesses, and improving agriculture.  Some projects were major buildings that provided jobs for the period of construction and afterward were intended to be a source of continuing employment, such as churches, stadiums, museums, administrative buildings, and other municipal structures.  Some projects were just excuses for politicians to get rich
Graft and corruption were rampant.  How much of the money lined the pockets of corrupt politicians and middlemen is hard to say, but it was obvious to me as a young executive that by complying with the US Foreign Corrupt Practices Act, which all my colleagues and I signed, we were at a significant competitive disadvantage.  We agreed not to provide payment to any middlemen not directly related to a project.  Our competitors labored under no such restrictions.
Corruption however didn't stop the many people who spent significant portions of their lives in these countries striving to contribute to the improvement of the environment, and the quality of life, at the grass roots level.
I observed the contrast between the world of multinational head-to-head competition, and on-the-ground person-to-person education.  I had many conflicting thoughts at the time as I became acquainted with a full range of people involved in all apsects of foreign aid.  Nearly everyone did the best they could with the tools at their disposal.  But the deck is stacked against the indigenous people.  The poorest of the world's poor are still the poorest of the world's poor forty years later, despite the billions of aid money poured into the region.
I devised a story so I could explore again what it was like to straddle the developed and the developing world at a pre-9/11 time, prior to the Soviet invasion of Afghanistan, which in a geopolitical sense started the chain of events that brought us to today's dangerously polarized world.
Matt Reiser is a naive, untraveled American, who makes one huge simple mistake, which sends him on a journey that he is wholly unprepared for.  He needs to find his son and deliver a letter from his ill wife who desparately wants to reconnect with their son.  Matt's life until this trip has been orderly and predictable.  His son chose to strike out on his own for a different and more challenging life, joining the Peace Corps right out of college, and cutting off all contact with his parents for his own reasons.
On the way to find his son, Matt discovers a West Africa outside the confines of the taxi-airport-hotel-embassy bubble which is where most tourists spend their time.  By the time he reaches his son, he's in a better position to understand him, and himself.
My hope is the reader enjoys and respects the characters, and the countryside, as much as I did when I first traveled through the territory.  And will develop a deeper appreciation for the region and its ongoing challenges.
Thanks for giving me this chance to connect with your followers, Cristina.
Thank you Mark for sharing with us today. I will be reviewing Facing the Son, A Novel in Africa at a future date.
MARK RUDOLPH'S GOOD READS PAGE
Information on purchasing Facing The Son, A Novel of Africa can be found at the following links:
FOR KINDLE
FOR NOOK
KOBO BOOKS
iTUNES
By Frances - September 12, 2011

Email ThisBlogThis!Share to TwitterShare to FacebookShare to Pinterest
Labels: A Novel of Africa, Facing the Son, Mark Rudolph