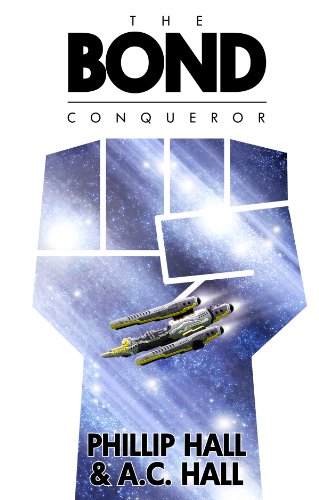 The Bond Conqueror by Phillip Hall & A.C. Hall
Hall Brothers Entertainment
I received this book from the author with a request to review. No promise of a good review was sought or given. I received no compensation for this review. The review is my honest opinion.
From Good Reads:
Charles Bryant seems to have it all. A college professor on the esteemed intellectual planet Academia 7, Charles is something of a celebrity thanks to his branding as “the Bounty Hunting Professor”. But his bounty hunting missions are more than just a gimmick. Charles has spent a decade of his life consumed with trying to track down the last man alive who caused the death of his wife. And now he may’ve found him.

With a rival professor trying to take him down back home, a powerful organization doing all they can to kill him and with every tough guy in the galaxy gunning for a piece of the legendary “Bounty Hunting Professor”, Charles Bryant and his friends may find completing their mission means more than just locating one man. It means coming face to face with the malevolent force that wants to reshape the whole of the galaxy and living to tell the tale.
My Review:
What an interesting book. When I first heard of it I thought, "guy book but I'll give it a shot. I don't have to be in love with a books synopsis to read it and honestly review it." When I saw the cover I thought, "Star Trek Enterprise. Or maybe Star Wars." Well I was kind of right and kind of wrong.
There is only one woman in the entire book. I don't think I have ever read a book where there was only one woman character and mention of one other.  I want to say this bothered me but the truth is I was halfway through the book before I thought, "what happened to the women?" Strangely I really was not disturbed that I was reading a book that had only a single living woman in it.  I am not convinced the authors really knew what to do with her either. She had moments where she was portrayed as weak and then she had moments where she bravely went where I do think she was meant to go, (at least not in terms of being the "weaker sex").
I was surprised by who my favorite character in the book turned out to be. But seriously  I really connected to the Harbinger. When he went into a battle and was thought to have died my heart broke. Now I hear you all going but what is wrong with the Harbinger? Well he is a man-beast assassin. Not a character you would really associate as being the favorite. A piece of advice from the Harbinger is found on page 225, "If you kill everyone else, I mean everyone you see, then there will be no one left alive to kill you."  So how is it he is my favorite? Because he is snarky and I love snark. I  also felt like he is also a tortured soul and you all know what emotion a tortured soul can bring out. Of the Harbinger, on page 216, Charles shrugged,"He grows on you." Yes he does.
The first line in the book that really stopped my heart came on page 52, when the three; the Charles - the Bounty Hunting Professor,  Sean - the student at Bounty Hunting University and Penelope - of the only woman fame, were on board a pirate ship. Yes I said pirate. There are pirates in this book! Charles and the leader of the pirates were talking  and then "Challenge you for leadership of the Gray Buccaneers," said Charles. WHAT?! I am certain that, and stronger thoughts, were what went on in everyone on that space ship's mind.
This book was a surprise for me. The Hall Brothers set out to entertain and they did. Big time. There was a lot of action, adventure, intrigue and jealousy with the possibility of  romance in a future book, (there is a future book right Phillip and A.C.??).
I would recommend this book to anyone, male or female, who likes adventure. Star Wars fans there is no Wookie but Harbinger comes close. I think it is an awesome book for the YA crowd, especially if they love Star Wars.  On Good Reads I am giving this one 4 Stars.
By Frances - August 27, 2011

I'm torn. This seems like an interesting book, but only one female? Haha, but I'll put it on my TBR and hope for the best.