I am pleased to have today author Rachel Wells with me. Rachel is the author of Enchanted. 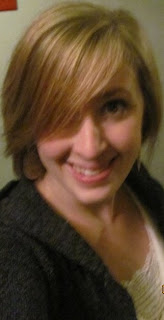 Hi everyone.  My name is Rachel Wells and I am an aspiring Indie author.  I have just recently put my YA paranormal romance, Enchanted, up for sale on the Nook and Kindle.  I say “aspiring” because while I have finished my book (that was the “easy” part), I am finding that spreading the word about it is actually harder than I had thought!  I am a new, unknown author and there are so many of us out there that it is quite easy to get lost and misplaced under all the new books that are constantly getting published every day.  Which is why I am very grateful to Cristi at AlaskanBookCafe who has given me the amazing opportunity to guest post on her blog and hopefully reach some potential readers!
So a little about myself…I’m a stay at home mom to three girls, married 13 years to a guy I met back in high school.  I live in central Massachusetts where the summers are hot and the winters are even colder.  I’ve got a creative side that I can’t ignore-I love anything crafty.  I love autumn.  My favorite holiday is Halloween and I’m drawn to anything “weird”, spooky, and/or paranormal.  I love antiques and anything old-fashioned and learning about the way things used to be.  I enjoy baking more than cooking, and of course it goes without saying that I love to read.  Some of my favorite books are Little Women, Sister Carrie, The Help, and the Twilight series.
As I said, I’ve got a creative side.  Ever since elementary school I’ve enjoyed writing.  I guess I always had an urge to write a full length book, but the prospect seemed very overwhelming, so I never really attempted it.  Corny as it may sound, after reading and falling in love with Twilight, I looked up Stephenie Meyer and learned that she was also a mom who literally had a dream, wrote a book inspired by it, and actually got published!  While I do not expect to do nearly as well as she did, I must say that she inspired me to try.
As for where my idea for my book came from, I’ve been going to a town called York Beach, Maine, for summer vacations ever since I was a child.  Now my husband and I take our kids there in summers, and we all love it.  A few years ago I saw an ad for a ghost tour in York that offers a walk around tour at dusk of “haunted places” in the area.  Of course, being interested in the paranormal, this grabbed my attention.  I went online to try to discover more about the tour or the so called “haunted” places, because it had never crossed my mind that there were any ghosts wandering the little beach town!
While searching I came across a bunch of information about the grave of a Mary Nasson in York, who was a reputed “witch”.  Different websites gave different information about who she actually was and what actually happened, which put the wheels in motion for my story.  In May of 2010 I began to write Enchanted, using Mary Nasson as my main influence.  The story just developed from there.
Let me tell you, writing is a long process!  It was easy to start the book, because I was excited about the new-ness of my idea.  However, at times I had no idea where the story was going and I felt as if I was almost waiting for the characters to reveal what was supposed to happen to me!  I have read that you should write every day no matter what if you are really serious about finishing a story.  For me, this was not true.  Some days it was just impossible to write, either because I had too much going on with my kids or my other obligations (cleaning the house, cooking, etc.), or I just had nothing to say and didn’t want to force it.  I wrote when I knew what was supposed to happen in the story, and I wrote only at naptime or after my kids were in bed for the night.  Sometimes I had a lot to write and sometimes I had only half a page.  But I decided no matter what I was going to finish.
After a little over a year of writing I did just that.  Initially I had my heart set on getting published the traditional way, but then I started reading all the horror stories of unknown authors getting rejection letter after rejection letter, and that made me think twice.  This past spring my husband surprised me with a Nook.  I began reading books from the “Steals and Deals” section and discovered Indie writers, such as H.P. Mallory and Amanda Hocking for example, who were doing quite well for themselves with self-publishing.  I decided if it was working for some people, it wouldn’t hurt me to try…shoot for the stars, right?
Which brings us up to date.  My book, Enchanted, is available on the Nook Enchanted for Nook. Buy it here. as well as on the KindleEnchanted for Kindle. Buy it here.  It’s only been available for a couple of weeks and while it’s not flying off the “shelves”, I do have hopes for my little book!  I am hoping it can find its niche in the world and that at least some people will enjoy reading it as much as I have enjoyed writing it.  That being said, I can’t expect anyone to appreciate it without learning more about it, so below you will find a synopsis and an excerpt, taken from Chapter 16, when my main character, Mandy, has a run-in with the town psychic, Ophelia… 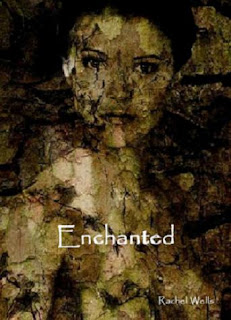 Great interview!
I enjoy reading about fellow Indie authors! :)Yes, aside from editing, promotion is the hardest part. Getting your book noticed in an ocean of books, it's very stressful. But wonderful bloggers like Cristina make it fun!
Rachel, your book is intriguing. I'll definitely be checking it out. Congrats, and Good Luck with it!!!

Hi, I just want to add my congrats on getting your book published, Rachel. I love quiet and/or shy protagonists because I think they have more to overcome than most others.

And Cristina, what a wonderful thing you're doing to help indie authors!

Congrats on self publishing and good luck Rachel...I await the review!