Review of Shifter 2040 by Ami Blackwelder 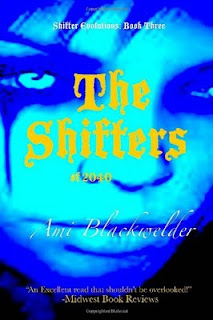 The Shifters 2040
Ami Blackwelder
* I was given a copy of this book by the author for review. No promise of a good review was given. I received no compensation for this review. The review is my honest opinion of this book.*
Aliens have been discovered in the United States. They have been perceived to be a threat and the military has been success in annihilating them. There last known holdout is Alaska. Dr Melissa Marn is a scientist working in a lab at the SCM (Shifter Counterinsurgency Military) Base. Being a part of the military is important for Melissa as her father is a military man. So even though she does not agree with the experiments being conducted on the Shifters and their children she still conducts them.
General Raul is insistent that they learn everything they can about the Shifters. He says it is for safety reasons but really he is power hungry and has beliefs that, to me, run a lot along the lines of Hitler. As a matter of fact through much of this book I thought of Hitler and his plan to eliminate Jews and others he found to be less than his idea of perfection. General Raul is so power hungry he will even plan and execute the murder of his superior to be bale to take his position.
Dr Bruce Wilder is also a scientist who works along with Melissa on understanding the DNA of the Shifters. From the onset we know he does not agree with the experiments. However he also still conducts them, even though he tries to help the Shifters, aiding some of them to escape. He stays because he is in love with Melissa.
The Shifters know they are dying out. In hopes of carrying on their race they are mating with humans and creating secret hybrids. The host mothers do not know the fathers of there children are Shifters. The Shifters allow the humans to raise the hybrids as human for 19 years when it is expected they will be able to shift into their species. The Shifters believe being able to mimic humans and stay in human form longer is the only way their children will survive. They keep watch over the hybrids until the time comes that they can take them back.
One night Melissa goes to a bar wanting to escape from all thoughts of the experiments and the military. There she meets Brendan and decides to have nameless sex with him. Too late she learns that he is a Shifter. Weeks later she discovers she is pregnant. She seeks an abortion but cannot go through with it. She tells Bruce about it and he is, naturally, angry and hurt. However he decides to help Melissa hide her pregnancy in the hopes that she will marry him and they will raise the baby. Melissa however decides to give her twins up for adoption. She chooses the Governor's wife to be their mother thinking they will be safe with her. The night before the Governor and his wife can take the twins home, there is a break in. One twin is taken and the other is in danger of being discovered as a Shifter's child.
General Raul is getting more and more aggressive. He has succeeded at making Shifter/human type clones but wants to experiment more on the children. He has been conducting secret experiments on soldiers as well as Shifters and Hybrids, resulting in many deaths. Being drunk with power and seeking more power, the deaths do not bother him.

I found this to be a compelling read. The story line is exciting and contains many elements to make it believable. You can tell that the author has done her research well. She writes her characters well and elicits much sympathy for the Shifters and Hybrids. You become invested in the welfare of the Hybrid children. You understand Melissa and Bruce even though I felt frustrated by her decisions. She is like the abused wife that you beg to leave her husband. You can see the train wreck coming but she refuses to .
There is love and romance in the book. The Shifters show a beautiful love for their children and each other. Melissa is torn between Bruce and Brendan, the Shifter father. Brendan loves his wife Joelle but is torn by his feelings for Melissa. The sex scene between Melissa and Brendan was written well and is okay, (in my opinion), for the YA crowd. Their are other romances going on, Diamond, (one of the first Hybrids), and Keenan, (a Shifter/human clone who is a soldier n the SCM) as well as General Raul and Captain Lane. The feelings of the Shifter fathers for their children was beautiful to read. There is also jealousy, power induced madness and action in this book.  I enjoyed this book very much and am going to be starting Hybrids soon. As this is book 3 you can choose to go forward or backward in this series. I have to know what happens to the children. I am unbelievably invested in them. I will probably go all the way to the final book before returning to the beginning. We shall see.  I highly recommend this series. It is very interesting. I give this book 5 stars.

* An apology to author Ami Blackwelder for the delay in the review. I had planned an earlier date for it but due to life throwing me curves I am off track.*

For more on Ami  and the series please go to Ami Blackwelder on Blogspot.
Ami can also be found on Good Reads Link

Be certain in look for the review of Hybrids, a special Halloween excerpt from Ami and a giveaway of Shifters Evolution  all coming in October!

Please leave a comment. I love hearing from you. Ami does check in and I am sure will answer any comments you leave for her.
By Frances - September 22, 2011

I'm so glad you enjoyed the read, I was nervous, hoping you -from Alaska- would love it! I'm glad! You nailed the Raul comparison on the head -Hitler was in my head as I wrote Raul. Interestingly, we -or you- will learn more about Raul in the prequel (Past)...SCM of 2030. We understand his motives a bit more.

I really appreciate your support and hope to hear from readers! I eagerly await any questions and am excited to giveaway my prizes to the Halloween winners coming up! Stay tuned!!