Review of Game by Phil Truman 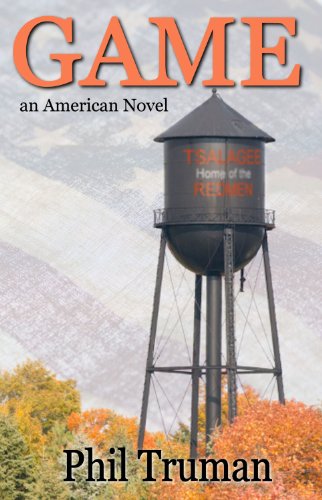 Game by Phil Truman
Published by  Buoy Up Press
Good Reads Synopsis:
Year in and year out the football powerhouse Hert City Trojans import a ringer to fuel their championship charge, but their luck is about to change. In the small backwater town of Tsalagee, first-year coach Donny Doyle knows the only way he can fulfill his promise to unseat the Hert City juggernaut, is to beat them at their own GAME. But in his own recruit, the mammoth and powerful, yet troubled and ominous Leotis McKinley, Doyle finds more than he bargained for. Truman’s character-rich novel GAME spins an energetic tale around the intensity of small-town high school football in America. And yet, amid the fast-paced drive of the story, lies an account of the human spirit struggling through adversity and finding victory. Readers of any age or gender will feel the triumph, honor, and glory that comes from the…GAME.
* I received this book from the author to review. I was not compensated for my review. All opinions are mine. *
My Turn:
This book is really a departure from norm for me. As such I thought it was going to be a difficult book for me to read let alone review. It is one that I would really consider to be a "guy" book. I like sports. I like football. Chicago Bears are my main team. Yes I lived in Chicago. Now Seattle Seahawks are my second team.  College ball goes to University of Kentucky. Yes I am a home town kind of girl. So I do enjoy watching the games.  I just don't generally read sporty books.
So I was pretty much thinking what am I going to say? Imagine my surprise when I liked this book. Yes I do still think of it as primarily a guy book. But now it is a book that can be shared by a couple. So go ahead and read it with your guy.
Phil writes in such a way that you feel a part of the story. I felt the pain of the players in the opening scene. I felt the agony of defeat. I could picture the game in my head. It was like being at my high school games or attending a UK game. Later on you feel the excitement of winning. Through out it all you feel as though you are there. Not just with the game moments either. When the author wrote of the cafe and the people drinking coffee, talking football and placing bets, it was like deja vu. Part of the story takes place in Vietnam. The author wrote in his extremely realistic style. I have never been to war. My son has. I have heard about it from him. I have also read it in other books and seen it on my screen, both movies and reality. I believe Mr. Truman has written some of the most heartbreaking, heart pounding and realistic war scenes that I have read. At times I felt tears rolling down my face reading it. I also felt my heart swell with pride at the men portrayed and their bravery.
This was an amazing book for me. Going in not expecting to like it and coming out loving it shows what an excellent job Phil Truman did writing this. The book is filled with action  so it moves along quickly. But not so quick that you cannot get to know the characters. You will know and care for them deeply. This is an inspiring book. There is no adult themes, (aside from war and violence), in it so it is perfect for high school football fans. It is a great book for either sex and one that mothers and sons can share and talk about. This book would make an awesome gift for football fans. It is small town football at its best.
Phil is giving a copy of this book to one lucky person. All you need to do is leave a comment here or on his Christmas guest post, found HERE. Please tell us your favorite tradition and be sure to leave your email address so we can contact you if you win!
Also by Phil Truman:

Phil also invites you to visit to his personal sites:
http://philtrumanink.com/
http://philtruman.blogspot.com/
He is a Good Reads Author: http://www.goodreads.com/author/show/1407524.Phil_Truman
Comments Always Welcome!
By Frances - December 22, 2011

My favorite Christmas tradition is reading a christmas story every night in December. Sounds like a good book. :) (oh my email is in my profile)

Phil is a fantastic writer! All his books are great and can be enjoyed by both genders. Phil has a wonderful sense of humor. Legends of Tsalagee is a great read too.