October Happenings on the Blog

Wow The last day of September! This month went fast. October of course means Halloween is here! YAY1 Yes, I am still a kid. haha. I am so excited about Halloween. I love it! Junior has his costume which he kind of  modeled. 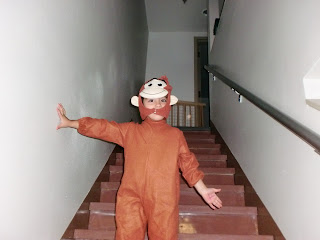 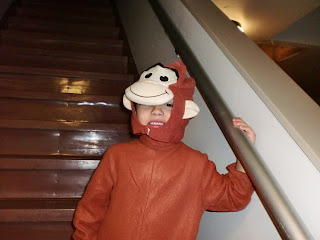 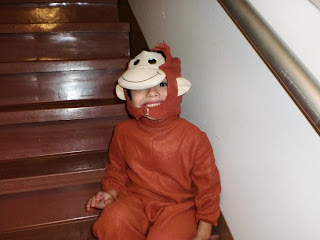 He wanted to be Curios George. The mask actually fits better than he has it but he likes the sensation of it on his mouth. Who am I to argue so long as it does no harm. We went online and bought this from http://www.dizguise.com/  for $25. He was very comfortable in it and wore it for a few hours trying it outside also. He said he was warm in it - the temperature was close to 50. So we are happy with it. I got his little brother a monkey costume too but since he is in Chicago I do not have a picture of him in it yet. Here is the one from the site:

Yes, it is that cute in person too. I can't wait for my daughter to send the baby's picture in it to me.

I received an GR message from author Todd Russell. I had featured his book, Fresh Flesh, on one of my Waiting for post. And it is now out and available on Amazon. Yay! Here is the cover, remember it? Click on Amazon and it will take you to the purchase page.

I received an email from Joni B Cole last night. She is the author of Another Bad Dog Book.

I had feature her book as one I was waiting on. Well it is due out officially October 4th but is available on Amazon already. Yay! I am excited about it. Guess what? She is generously giving away a SIGNED COPY of her book here on my blog!! So look for the giveaway next week.

Speaking of giveaways...I have some awesome books to give out in October. Ami Blackwelder author of the Evolution Series, (I did a review of The Shifters of 2040), sent me 6 books to be given away!!

Ami has a new book coming out soon and I will be reviewing it as well as the rest of the Evolution series. Here is a peek at the new book, ( yes it is a Mermaid tale):

The Mers by Ami Blackwelder

More awesome giveaway news. A.C. Hall and Phillip Hall have sent me their new book SCROLLS and included a copy to be given away! You may remember I did a review of The Bond Conqueror by them. I am super excited by this and will have a review of Scrolls coming up. Here is what the book looks like:

Marty Schultz is a young man who just wants to be left alone. While his fellow students at Barker State University are living it up, Marty keeps his distance, spending most of his time alone. The used bookstore where he works specializes in the trade of ancient scrolls and Marty copies down their details for use in his web-comic. Little does he know that in the right hands these scrolls can be used to perform powerful magic and his use of them has drawn the attention of some very dangerous people. As Marty struggles to come to grips with the reality of the scrolls and his growing ability to harness their power he also has to face the past that he moved over 3,000 miles away to escape. Marty just wanted to be left alone, but that’s no longer an option. His life is suddenly very full and whether he likes it or not he has to find a way to deal with it. But if he’s going to reconcile with his angry ex-fiancée whom he left two years ago with no explanation, pacify his big sister who is trying to uncover a secret he’s worked hard to hide and get out from under the thumb of a scheming classmate he’s going to have to find a way to survive against a magic wielding madman who has decided that Marty Schultz must die.

Also happening on my blog , which I am so excited about too, is I have many awesome guest bloggers for the month. I invited authors to write something that would be good for Halloween.  I have an amazing line up with post from: Bret Jordan, Kat Nove, Laurie Bowler, Ami Blackwelder, Tarrin P Lupo, Scott Nicholson, Sheri Browning Erwin, Maranda Russell, Stephany Simmons, Tracy Sharp, Natasha Larry, Pavarti K Tyler, A.C. Hall, Phillip Hall,  Weston Kincade, Cameo Renae, Marlon Pierre- Antoine, S. Wayne Roberts, Suzan Battah, Kimberly LaRocca and possibly a few more awesome writers. I will have links to their websites so if you like what you read you can find out more. I hope you get some thrills, chills and smiles.

Of course I will also have book reviews going on.  A few of the authors planned are Josi S Kilpack, Emily Sue Harvey, Gregory Allen, NeonSeon and from the Dark Side Book Tour - Stacey Kennedy and A Jacob Sweeny.

A lot is planned and there will be some unplanned stuff because life happens every time you make a plan. I hope you will join me and have some fun.

Very cute costume! My son was a monkey for Halloween last year. This year is Super Why! :)
Thanks for stopping by my site. I am now one of your newest follower.

I wanted to add that I am sorry you had a rough day with your son. Tomorrow is a new day with new blessings to be discovered. :)