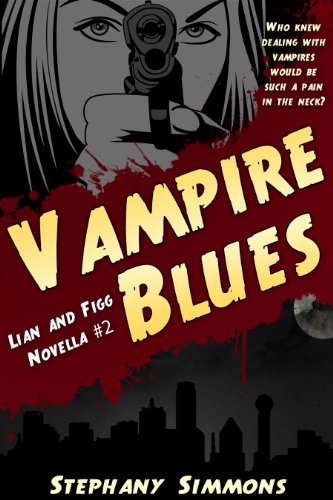 Vampire Blues by Stephany Simmons
Book Two of Lian and Figg
Kindle Edition
*An Ebook copy was given to me for review by the author. No compensation was offered or received. No promise of a good review was made. Opinions expressed are solely mine.*
Good Reads Blurb:
Lian and Figg are still recovering from events that almost destroyed their lives, but when a good friend comes to them with a serious problem, they can't turn him away. Soon, Lian and Figg are neck-deep in local vampire politics and framed for a massacre they had little to do with. On top of that, the local werewolf pack is sniffing around, looking for favors.
My Turn:
I was happy to see this  sequel to Voodoo Dues, (review here),  pop up.  I had been eagerly waiting for it. I enjoyed Voodoo Dues but, as Stephany is a new writer, I was curious to see if she could keep it up. I am ecstatic to say YES SHE CAN.
The action comes fast and steady in Vampire Blues. The characters we loved in Voodoo Dues are back and just as quirky as ever. Ms Simmons has brought  a gay ghost, vampires and werewolves into the story. Oh my!
One of my favorite characters is Carl who, in this book, brings with him a gay ghost. I do wish Boyd, the gay ghost, had a bigger role. I would have loved to read the conversations between him and Carl.  I imagine they would be truly hysterical.  Here is a sample of Carl for you:
Carl Tharpe, necromancer, former cross-dressing psychic and as of late, waiter, climbed out of the passenger side, unfolding his massive frame, even the SUV was too small for him. “Do you think they’re dating?” Figg asked me.
Carl was probably in his mid-thirties and easily six-foot-five. My best guess was that Rene was in her sixties, a diminutive five-foot-two at most. “I hope not,” I told Figg. “That would just
be…”

“Weird,” we said at the same time.
“Would you consider that a ménage à trios?” Figg asked. Carl had a constant spirit companion, a psychic ghost of a gay man who’d perished from a drug overdose in the late 1970s.
(Kindle Locations 47-52)
and
The door chimed and John walked in, wearing a pair of sweat pants that I’d forgotten I had and an oversized X-men t-shirt that Figg liked to sleep in. “Figg will kill you if you mess that shirt up,” I said. She’d told me so many times that it was old-school and that she’d never find another one like it.
“Give me a break, man,” John said, “It’s the only thing we could find that would fit me.”
“We?” I asked.
“Carl said I had to get dressed because his ghost was driving him nuts,” John sat in one of the club chairs near the door, “whatever that means.”
"Boyd is gay.” I grabbed a bottle of scotch and two glasses, walking over to join John.
“If I didn’t need a drink before, I do now.” He took one of the glasses from me; I opened the bottle and poured.

In this book Lian and Figg are trying to figure out their relationship. Carl being harassed by vampires, John maybe turning into a werewolf and trouble with a vampire stalker all get in the way of them figuring it out. But that is okay as we get to be a part of the action. There is plenty of it in this edition. Skip has to be one of the most unlikely vampires I know of. Forget sexy. However Skip does have his charm.  Read on:


“For a few months now,” he looked up at me. “I know what you’re thinking. I thought the same thing.”
“What?” I sat down across the table from him.
“Vampires are supposed to be handsome and seductive.”
It was exactly what I was thinking. I started to ask him if he could read my mind, but thought better of it.
“I thought it would be like instant cosmetic surgery, at least liposuction.” He grabbed his gut and shook it up and down. “Have you ever heard of a fat vampire?”
Kindle Locations 427-432

As you can see Stephany has a great sense of humor that shines throughout the book. She is also adept at writing action and romance, (clean), both of which are a big part of the book. The Lian and Figg series are not your usual paranormal  books.  Nobody is guaranteed to look perfect - not even the vampires who normally are. One gets the feeling that anything is up for grabs in the humor department and none of it appears to be truly mean spirited. Stephany writes of all types of paranormal so one never knows just who or what is going to be included in each book. I love this. It reminds me of Cracker Jacks - a surprise in every book. My one regret with this book is that it ended and now I must wait for the next installment. I hate waiting. Write more Stephany. Sleep is overrated. Haha.

You may find out more from this author on her website http://stephanysimmons.com


Fan her on GoodReads http://www.goodreads.com/author/show/5028646.Stephany_Simmons