Review of The Hybrids of 2050 by Ami Blackwelder 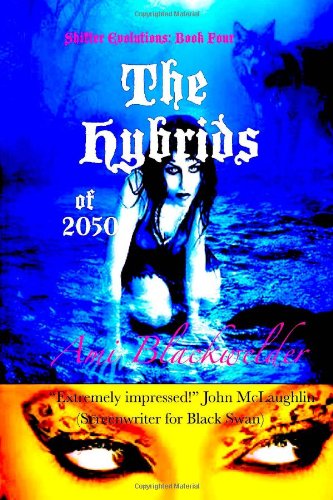 The Hybrids of 2050 by Ami Blackwelder
Shifter Evolutions  #4
A Dystopian Shifter Romance
Paperback, 290 pages
Published March 7th 2011 by CreateSpace
Good Reads:
Alaska 2050 Hybrids caught between two worlds. Shifters on the verge of extinction. Humans divided on either side. Summary: Love and betrayal continue. Set in Alaska 2050, Melissa Marn and Bruce Wilder continue their work for the SCM under the hard, maddening General Raul. With military life now a cat and mouse game between Melissa and the General, the hybrids and the SCM, will she still have room for Bruce in her life? Will she ever see her twins again? After betrayal strikes the General for a second time, is Melissa safe? Since the annihilation of the shifters, only two elders remain in Anchorage, and an uncertain future awaits the hybrids. Will Diamond overcome her heartache and loss and find a family with Unseen? When a human joins the team, will he prove to be trustworthy? Will Melissa aid the hybrids in their survival or will she deliver the ultimate betrayal? With underlining themes of how prejudice breaks human connections and animal/wildlife conservation, this novel which has received rave reviews will leave the reader flipping through the page.
Me:
In this book we are introduced to the hybrid offspring of the Shifters and to new characters from Russia, including Uri a human. We learn more of Melissa's feelings toward the twins she bore with a shifter. Her relationship is still on with Bruce but both remain working in the lab even with torn loyalty. General Raul is more powerful and is more closely resembling Hitler,(or perhaps Hitler crossed with  Dr Mengele), with his experimentation on the Shifters.
Ami Blackwelder has written an enthralling continuation to the Shifter Evolutions Series. This is the fourth book in the series and the second I have read. Ami recommends you start with the third and fourth books then decide to go back to the beginning or continue forward. The story continues to be well written and tightly woven. Your heart will be pounding through out this book. The characters are once again strongly written with more clues dropped at what motivates some of them.  I am becoming more intrigued with General Raul, (though I still do not like him). Ami does an awesome job weaving together the books in this series. The flow is flawless so far. The hard part for me comes next. I am left now with the agonizing choice of the beginning, (where my curiosity of General Raul will be sated), or following the story to the end. I do so badly want to know what is next. Hard decision time. I am not certain which way I will go. I weigh in about equal in curiosity of Gen Raul and the need to know what happens. Oh Ami, you are sadistic! I think I will be surprised as everyone else as to which way I go. To make matters worse, the first book of the new series, The Mers, is out on October 31st!!!. Kindle/Nook price will be  .99 cents.
Ami's Books are a part of the Halloween Fun Giveaway. So if you want to read them, free, please enter today. Time is running out! To enter The Halloween Fun Giveaway Click This Highlight or go to the Giveaway Tab at the top.
For the review of: The Shifters of 2040
For Ami's website: http://amiblackwelder.blogspot.com/
Be sure to check out all the giveaways on her blog. She has some awesome ones going on now!
Comments always welcome!
By Frances - October 29, 2011

Email ThisBlogThis!Share to TwitterShare to FacebookShare to Pinterest
Labels: Ami Blackwelder, The Hybrids of 2050

Thanks so much for your time! I wonder which you will choose first!